Getting a Fussy Person to Try A New Food

Posted on February 3, 2014 by creationsbybg

Recently we started a regular routine cooking for some friends and a few weeks later going to their house for dinner. The group had expanded to six the last time at their house and this past Saturday night we ended up with 10 around our table.

Pete is the chef at McMinnville’s Cooperative Ministries Chaplains Pantry Caterers and he enjoys preparing homestyle comfort foods  for his customers.  He will even prepare some foods he personally does not care for because he knows they are popular.  So he has posed an interesting challenge to us.

We like trying new foods but sometimes, with someone like Pete, we have learned it is better not to inform the person what the food is until after he has taken a taste.  Such was the case this past Saturday when my husband prepared a stew made with rabbit from Bad Rooster Farm in Sheridan.

Pete’s first guess was poultry and that is a very common assumption when people eat rabbit without knowing. The meat is very tender and mild and dishes can be prepared as you would prepare chicken. 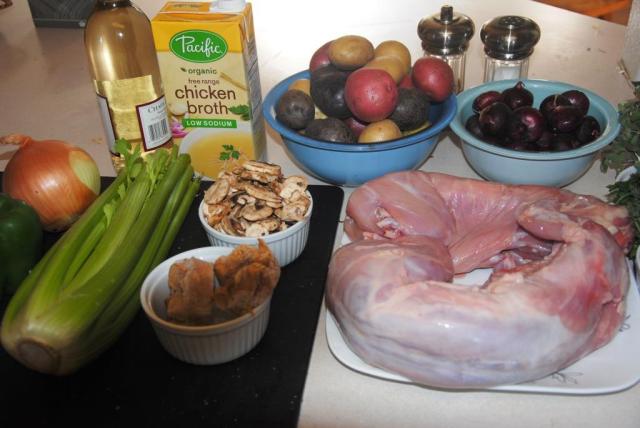 When Pete discovered it was rabbit he had no trouble eating seconds….and thirds.

Beth and Graham met online almost 20 years ago and married in 2007. Planning for retirement has included finding more time to play again and creativity is blooming. Now that we have moved to Oregon our time is split between exploring and creative endeavors. What fun! Following several years enmeshed in the local food movement in West Virginia and active involvement in the establishment and running of a year-round indoor local food market, visiting farms and telling consumers about them is a work of joy.
View all posts by creationsbybg →
This entry was posted in chicken, farm, Local food, protein and tagged chicken, farm, flavor, Local Food, rabbit. Bookmark the permalink.